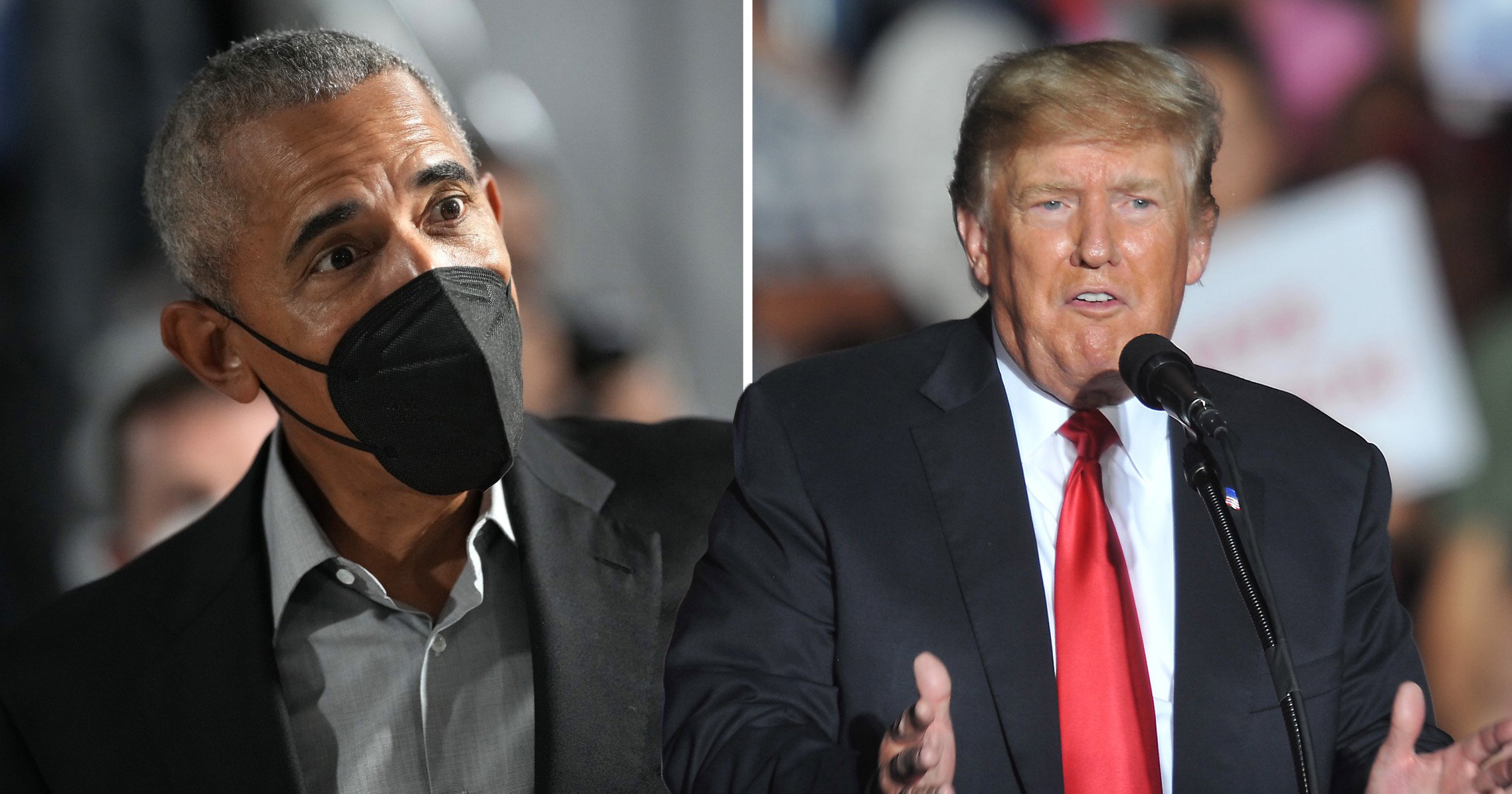 Barack Obama slams Donald Trump at the Cop26 summit on Monday, when accused his successor in the White House of ‘four years of active hostility towards climate science’.

The former US President said he ‘wasn’t real happy’ about Mr Trump’s decision to withdraw from the landmark Paris Agreement, but declared: ‘the US is back’.

Mr Obama has previously made veiled criticisms of his Republican rival, but such an openly hostile intervention is rare.

He also took a swipe at the Russian and Chinese governments, whose leaders have not attended the conference in Glasgow.

It came as the former US President warned that under-threat island nations are the ‘canary in the coalmine’ on the climate crisis and urged world leaders to take far more radical action.

But he paid tribute to Mr Trump’s successor Joe Biden and the American people’s action on the environment.

Speaking to delegates at the crucial conference this afternoon, Mr Obama said: ‘Despite four years of active hostility towards climate science coming from the very top of our federal government, the American people managed to still meet our original commitment under the Paris Agreement.

‘And not only that, the rest of the world stayed in the deal.

‘And now, with President Biden and his administration rejoining the agreement, the US government is once again engaged and prepared to take a leadership role.’

He continued: ‘Some of our progress stalled when my successor decided to unilaterally pull out of the Paris Agreement in his first year in office.

‘I wasn’t real happy about that.

‘And yet, the determination of our state and local governments, along with the regulations and investment that my administration had already put in place, we were able to keep moving forward despite hostility from the White House.”

However, he suggested world leaders are ‘nowhere near’ where they need to be on climate change, and slammed ‘most countries’ for failing to meet the targets put in place six years ago in Paris, when he was President.

‘The consequences of not moving fast enough are becoming more apparent all the time’, he warned.

‘When it comes to climate, time really is running out.
‘Collectively and individually, we are still falling short.’

Speaking as the talks enter their second week, Mr Obama said larger nations should shoulder more of the burden of fixing the environmental emergency – with the theme of the talks on Monday being support for poorer countries.

He said the plight of island nations under threat of being lost to rising sea levels should send a message to the world to act now.


‘Those of us who live in big, wealthy nations, those of us who helped to precipitate the problem, we have an added burden to make sure that we are working with and helping and assisting those who are less responsible and less able, but are more vulnerable to this oncoming crisis’, he argued.

The Hawaiian native described himself as an ‘island kid’ and ended his speech quoting a Hawaiian saying which he said roughly translates as ‘unite to move forward’.

Earlier, Cop26 president Alok Sharma said countries must deliver on commitments made in the past week.

Ministers are arriving for the political stage of the negotiations after leaders and countries signed up to a range of initiatives last week from tackling deforestation to curbing coal power and cutting methane to prevent dangerous global warming.

Mr Sharma said finding consensus among almost 200 countries – needed for agreement under the UN climate system – was not going to be straightforward but progress last week demonstrated a ‘constructive spirit’ among negotiators.

The announcements countries made last week are not necessarily included in their national plans for action this decade, which leaves the world far off track on meeting the internationally-agreed goal of trying to limit global warming to 1.5C to avoid the most catastrophic impacts of climate change.

Negotiators are trying to hammer out a “cover decision” from Glasgow that will set out how countries will close the gap between the action plans to cut emissions in this decade and what is needed to avoid temperature rises of more than 1.5C.

Vulnerable countries are pushing for nations to revisit their plans, known as nationally determined contributions (NDCs), annually to close the gap, but others are pushing back against speeding up the process from its five-yearly cycle.

Oil-rich Saudi Arabia is reportedly among those nations trying to reduce ambitions on cutting emissions.

Mr Sharma added: ‘(Vulnerable nations), and the generations to come, will not forgive us if we fail to deliver in Glasgow.’