Soldiers pepper-spray migrants to stop them hacking down border fence 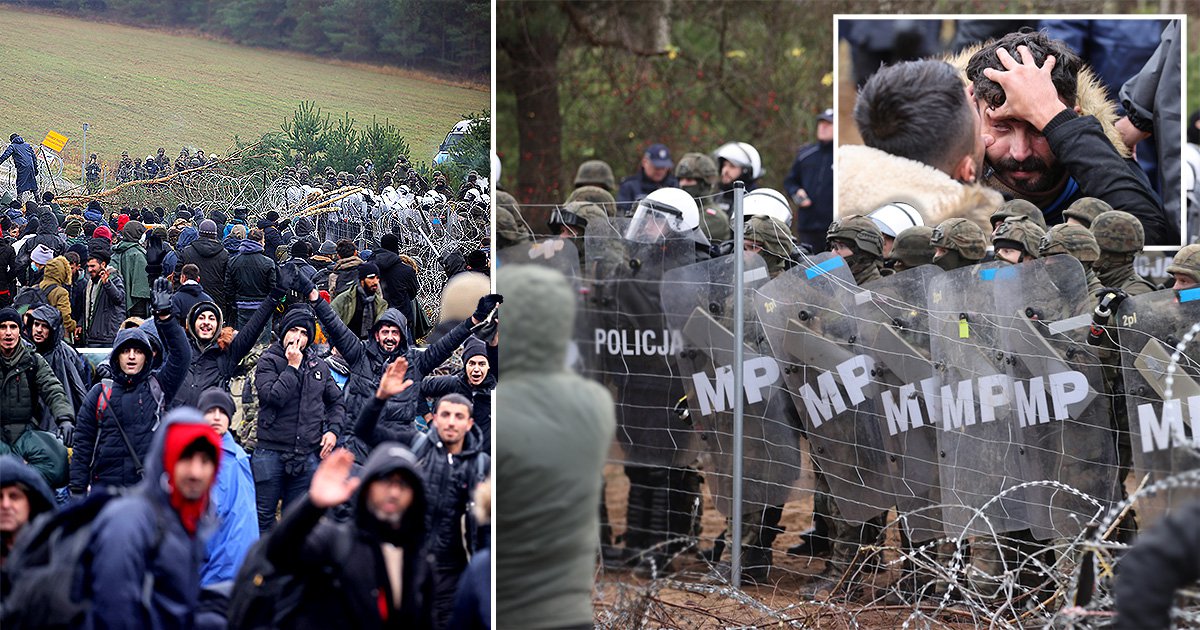 Polish troops have been filmed pepper spraying migrants after they attempted to hack down a barbed-wire border fence with branches and spades.

Thousands of migrants are massed near the border with Belarus, which has been accused of allowing them to reach the EU in retaliation for economic sanctions.

There were extraordinary scenes on Monday as authorities from the dictatorship escorted over 1,000 people – mostly from the Middle East – to the Polish border fence near Kuznica.

Poland has vowed to ‘defend Europe’ and warned of an ‘armed escalation’ of conflict, sparking fears of a new deadly chapter in the European migrant crisis.

Having blocked hundreds of people from entering the country yesterday, Polish government spokesperson Piotr Muller said a further 3,000 to 4,000 migrants were gathering near the border.

‘We expect that there may be an escalation of this type of action on the Polish border in the near future, which will be of an armed nature,’ he said.

Thousands of extra troops have been deployed after desperate crowds tried to cut a razor-wire border fence.

At some sections of the line, small children were held up by parents who pleaded with the Polish forces to let them through.

Others chanted: ‘Germany,’ which is renowned for its hospitality towards refugees.

Poland, the European Union, the US and Nato say Belarus is orchestrating the problem in retaliation for criticism of Alexander Lukashenko’s brutal crackdown on opposition.

The authoritarian leader stocked international outrage in May when he used fighter jets to force a Ryanair flight to land in the capital Minsk, where a prominent opposition journalist aboard was then seized.

Lukashenko has been accused of ‘weaponising’ migration by luring people from the Middle East and Africa to his country, then despatching them to next-door EU nations in response to the bloc’s sanctions.

An increased number of flights have been landing in Minsk from Middle East countries, fuelling allegations the government is turning a blind eye to traffickers encouraging people to travel to Belarus as a stop-gap to reaching Europe.

Poland, Lithuania and Latvia have all seen a surge in the number of people trying to enter their countries illegally from Belarus in recent months. Many of them have come from the Middle East and Asia.

Polish media said many of the migrants gathering near Kuznica were accompanied by armed individuals with dogs.

The head of Poland’s national security department, Stanislaw Zaryn, said the migrants were under the control of Belarusian armed units.

Belarus has rejected the statements as unfounded and unsubstantiated, and accused Warsaw of violating agreements by moving thousands of troops to the border.

The EU is considering extending sanctions against third-country airlines flying migrants to Belarus amid calls from countries like Germany to ‘take action’.

There are increasing concerns for the safety of the migrants as temperatures plummet below zero.

Humanitarian groups accuse Poland’s ruling nationalists of violating the international right to asylum by pushing migrants back into Belarus, instead of accepting their applications for protection.

Migrants being expelled from Poland are being refused back into Belarus, and people are finding themselves stranded and freezing in Poland’s forests. Several have died of hypothermia, according to the BBC.

Poland insists its actions are legal.

The Prime Minister Mateusz Morawiecki doubled down on a pledge to protect its borders, saying: ‘The Polish government is determined and we will defend the security of our country and the entire EU, respecting our international obligations and bearing in mind, above all, the interests of the state and the safety of Polish soldiers, Border Guard officers and citizens.’

The US State Department has also called for Belarus to stop ‘orchestrating’ an influx of migrants at the Polish border, blaming Lukashenko for the ‘coercion of vulnerable people’.

The Belarusian border guard agency earlier told state media that more than 2,000 ‘refugees’ had gathered in front of Polish barriers and were heading for the EU ‘where they want to apply for protection’.