Thousands of migrants arrive at Polish border as soldiers sent in 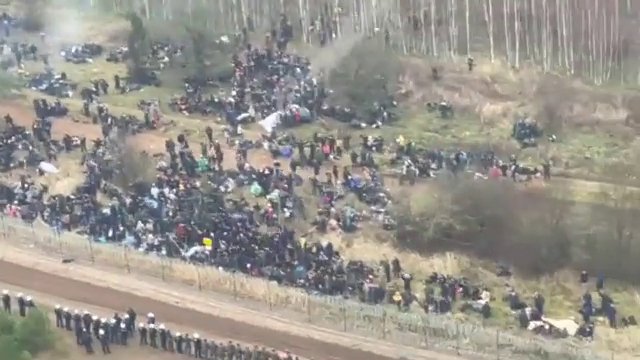 A huge caravan of people desperate to reach Europe is massed on the Polish border.

Thousands are passing through Belarus, which has been accused of allowing the migrants to reach the border in retaliation for economic sanctions.

Poland has mobilised its territorial defence force to help border control prevent the group entering the EU as fears of a violent clash rise.

With troops on both sides of the border and thousands desperate to cross, the humanitarian situation risks spiralling out of control.

Video posted on social showed a huge number of people walking down the motorway to the border.

One Polish minister estimated the crowd numbered 12,000 people, but this could not be verified.

It’s unclear to what extent the migrants are being assisted or tolerated by the Belarusian authorities but they appear to have met little resistance on their way to the border with Europe.

It’s the latest escalation in what has been a steadily deteriorating situation at Europe’s border with the rogue state over a number of months.

Belarus’ poor diplomatic relations with the rest of the continent all but collapsed during the violent response to protests in the wake of the 2020 election.

Authoritarian leader Alexander Lukashenko was re-elected in a vote widely seen as lacking legitimacy amid widespread reports of fraud.

Members of Poland’s of Territorial Defence Forces have been instructed to head for the border amid reports military assets have also been sent in.

According to the interior minister for Lithuania, which borders Belarus to its south and Poland to its west, the government is preparing to declare a state of emergency in its border regions and is moving troops to vulnerable areas.

The attempted mass crossing is taking place near Kuznica in the north east of Poland.

Lukashenko has been accused of weaponising the migration crisis in recent months to put pressure on Brussels to relax sanctions.

Hundreds of flights from the Middle East have landed in Minsk but the real destination of many of those on board is the land crossing into Europe.

Hundreds of Tesla drivers locked out of cars by app glitch