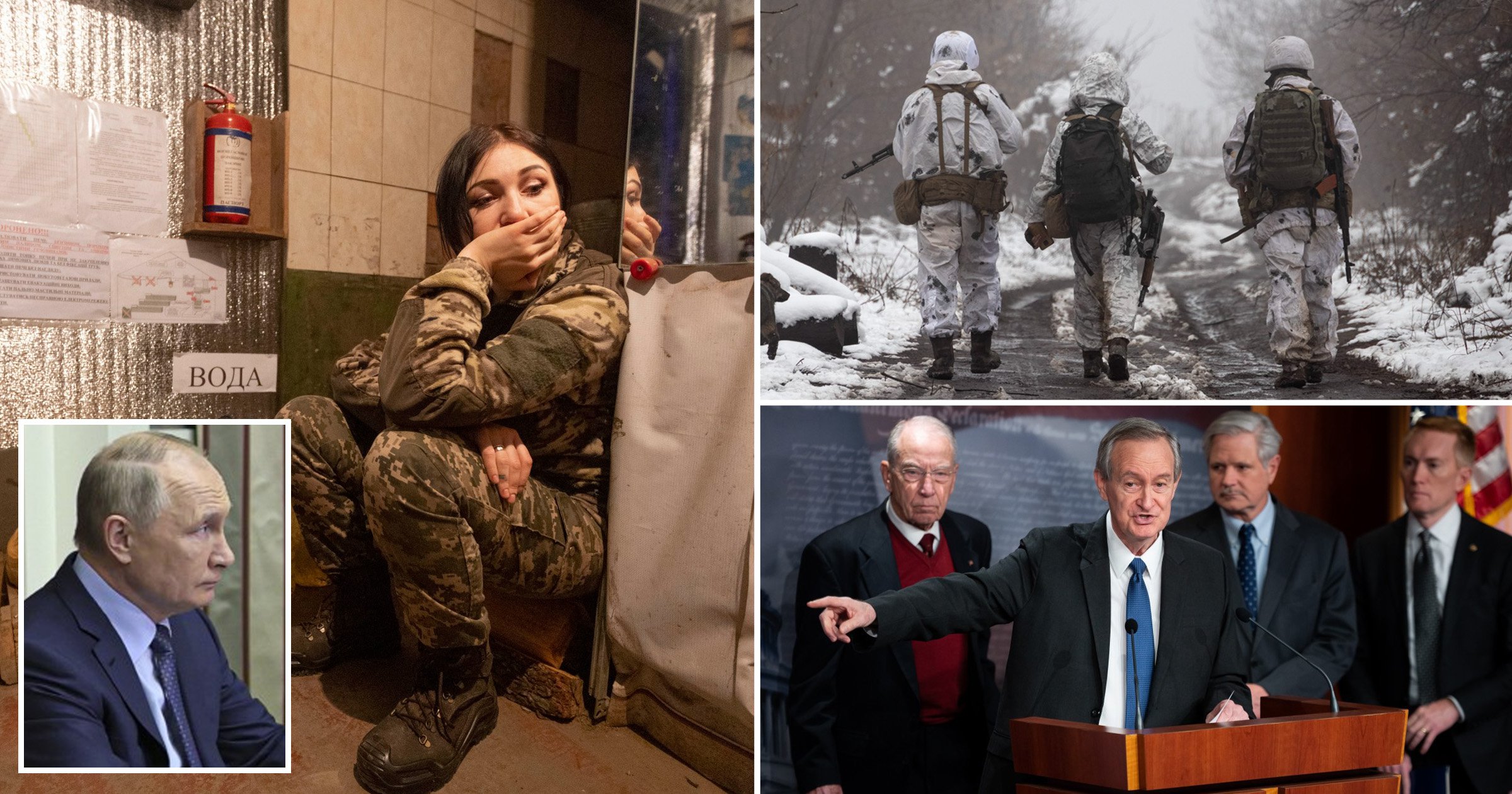 Tensions are rising on the Russia-Ukraine border, with warnings that war could break out between the neighbouring countries.

US president Joe Biden called Russian leader Vladimir Putin on Tuesday night in a desperate bid to de-escalate tensions but it is unclear what will happen next.

Mr Biden warned Mr Putin that if Russia invades Ukraine there will be US sanctions – but after two hours the pair were said to have made little progress.

Just how did it get to this point and is war really likely? Here’s all you need to know.

Ukraine was part of the Soviet Union until its collapse in 1991 and has a lot of social and cultural ties to Russia.

But it has sought to build links with its EU neighbours and join NATO, something Russia is strongly against.

When Ukraine got rid of its pro-Russian president in 2014, Russia seized and then annexed the southern Crimean peninsula.

Ukraine and the West say the separatists are backed by Russia but Moscow denies this and has insisted that Russians fighting alongside the rebels went there on their own.

The Donbas conflict is still going on today. In recent weeks, Ukraine says tens of thousands of Russian troops have amassed within reach of its border and it is this build-up of Russian forces which is causing concern.

The West and Ukraine fear that Russia is planning to invade but Moscow has claimed it is just moving troops within its own territory.

Why has the US got involved?

The US backed Ukraine in 2014, when Joe Biden was vice-president, and Mr Biden continues to support Ukraine, pledging his ‘unwavering support’ to President Volodymyr Zelenskiy.

Aides say the Crimea episode – one of the darker moments for then–president Barack Obama on the international stage – looms large as Mr Biden considers the current crisis.

US intelligence has supported Ukraine’s claims about Russian troops massing near the border.

Officials have determined that Russia has moved 70,000 troops and made preparations for a possible invasion early next year.

Relations between the West and Russia are at levels not seen since the Cold War.

During Tuesday’s meeting, the US president reportedly told his Russian counterpart that if Russia did invade Ukraine it would face painful sanctions.

He added that Mr Biden said the US would also ‘provide additional defensive material to the Ukrainians … and we would fortify our Nato allies on the eastern flank with additional capabilities in response to such an escalation.’

However, Mr Putin’s foreign adviser Yuri Ushakov dismissed the sanctions threat during his own comments to reporters following the leaders’ meeting.

He said: ‘While the US president talked about possible sanctions, our president emphasised what Russia needs.

‘Sanctions aren’t something new, they have been in place for a long time and will not have any effect.’

Will there be a war?

War is definitely what many in Ukraine and the West are concerned about.

Some have interpreted the Russian build-up of troops as Mr Putin sending a message to NATO to stop supporting Ukraine.

CIA director William Burns has warned of a possible invasion and said President Putin ‘is putting the Russian military, the Russian security services in a place where they could act in a pretty sweeping way’.

Mr Putin says the deployment of troops within his country’s borders should not concern anyone else.

He reportedly told Mr Biden ‘the Russian troops are on their own territory, and they don’t threaten anyone’.

Russia wants legally binding security guarantees from the West that NATO will not admit Ukraine as a member or deploy missile systems there to target Russia.

Ukraine says Russia has no say over its ambitions to join the NATO alliance and dismissed the suggestion of security guarantees as illegitimate.

What happens if there is war – will the UK get involved?

At the moment no decisions have been made by US or EU about what would happen if Russia invades Ukraine.

Boyfriend stabbed his girlfriend to death then asked his mum to help cover it up
Sanctions have been mentioned and could be imposed to target the Russian government and economy.

Mr Biden has said he is ‘not interested’ in putting US troops in harm’s way, while the British government has said it is considering ‘defensive support’ for Ukraine.

Foreign Office minister Vicky Ford has said: ‘Any military incursion by Russia into Ukraine would be a strategic mistake.

‘The Russian government should expect significant strategic consequences. The costs of an incursion would be catastrophically high.’

She added: ‘Let us be very clear, we stand by Ukraine and we are considering an extension of purely defensive support to Ukraine to help Ukraine defend itself.’

There have also been calls to abandon the Nord Stream 2 project, a gas pipeline between Russia and Germany bypassing an existing pipeline running through Ukraine and Belarus.

Critics have claimed the project could be used by Russia as a political weapon, as it would continue Europe’s reliance on Russian natural gas.

Will there be any consequences to other countries if there is war?

If war does break out, relations between Russia and the West would further decline.

Energy prices could also increase as Russia currently supplies significant amounts of gas to other countries.